Step 5: Discover the secret formula that tells you exactly what your fans are expecting to hear in the lyrics of your songs, and blow them away!

And now it's time to put everything you've analyzed together.

Info: Click on the graphics to enlarge them OR hit STRG/CONTROL together with + to increase the browser zoom level.

1. The final step to finding your Uniqueness Factor.

In order to find out what your Uniqueness Factor is, we need to know what your fans experience when they listen to your songs.

What are they used to? What is their expectation of what kind of songs they'll get?

Each musician/band has a unique signature to what their songs are about. And the Uniqueness Factor tells you exactly what your musical fingerprint is - concerning the lyrics of your songs.

1. Find your discography's average quota for each storytelling criterion to know what your fans expect.

So after completing all the previous steps, we have our main storytelling criteria (step 2) and we know how many songs of each of Placebo's studio albums fulfilled that criterion.

Now, for each criterion, we need to sum up all the songs that fulfilled that criterion and divide it by the number of songs.

This graph will show you what your fans expect you to deliver in your songs.

If you don't understand what the criteria refer to, read this article again: The storytelling criteria for writing great songs

2. Fill in the album's average quota for each storytelling criterion

So we take the same chart and now, instead of the song categories, we put in how each album fulfills every one of those criteria (average quota of each album for each criterion):

After filling in each album into our chart, we get a better picture of how much an album fulfilled the fans' expectations and in which cases it wasn't as satisfying as what the Placebo fans expected.

3. For everyone who needs a little more order, you can also reorder the criteria:

The grey background in graph 4.3 defines the average value of all the seven studio albums of Placebo.

The framed criteria are the storytelling criteria that have the largest impact on the success of the Placebo albums. The album that didn’t sell well (Loud Like Love) strayed the furthest from the average value.

Note: This is not a list of what criteria is more or less important. For example, Placebo fans want the story externally to not end happily. So the first criteria (positive external value shift) is as important as the last one. Just switch it around: in 75% of the songs, the fans expect that the story ends negatively.

This graphic just demonstrates what the expectations of the Placebo fans are. And which album fulfills those expectations more or less than others do. And the most relevant storytelling criteria (framed boxes) are also the ones that their best-selling album Sleeping With Ghosts is the closest to (closest to the average of the complete discography).

Placebo fans appreciate albums that are close to the average value of the storytelling criteria and that do not stray away from it.

Let's look closely at the most successful album Sleeping with Ghosts, and the one album that was least successful, Loud Like Love.

We know now that the average quota of each storytelling criteria of Placebo's discography is the analytical approach to understand what fans want to experience in the songs of Placebo.

Now in this special chart above, you can see the storytelling trajectory that fans are used to when it comes to Placebo’s songs (orange).

Sleeping With Ghosts is Placebo’s most sold album because it follows that trajectory without deviating from the path.

If you look at Loud Like Love, you can see that this album strays the furthest and takes on a completely different path of what fans were expecting of Placebo. And that is a reason why this album was their least successful one.

Here's an easy way to understand the Uniqueness Factor:

Imagine, what makes your lyrics unique is like an ascending line.

You have waypoints along the way that are part of your journey and that you need to hit in order to reach your destination.

If you are clever you follow that path to get safely to your destination in time. You don’t want to make any detours. Because then you might get lost along the way, and never make it.

So by knowing all the parts of your uniqueness factor, you know the waypoints you need to hit to get to the top.

Those waypoints are the different storytelling criteria and their average across all the albums you’ve already released.

Crucial Waypoints to get to the top

There are some criteria that are crucial for getting where you want to go - like the only bridge on that mountain that you need to cross in order to get closer to the top, and you need to pay attention to those milestones. They influence your success the most because that’s what your fans value the most about the lyrics of your songs.

Placebo’s most successful album, Sleeping with Ghosts, is the one album that hits those waypoints and follows the path to the top. To Success.

But the album Loud Like Love takes on a completely different path straying the furthest from what fans were used to. They don’t hit all the waypoints, and it makes one detour after another. It doesn’t follow an ascending line, but it’s going in zigzags. Up and Down. So you see, if you try to climb a mountain like this, you never get to the top.

Now if we get back into more detail, the most important storytelling criteria for Placebo is that the character doesn’t get to a happy end. He doesn’t get what he wants. He fails or loses something. The average value of all the albums is three-quarters. 75% where it all turns out bad.

On Sleeping with Ghosts 86% of the songs of the album showed this negative shift. So this album was even surpassing what fans wanted to hear about in the songs.

On the contrary, on ‘Loud like Love’ the numbers were completely reversed. 75% had a happy ending. That was clearly not what fans appreciated about the songs of Placebo.

By knowing the exact storytelling criteria that have the largest impact on the success of an album and by also knowing the uniqueness factor of a band, I can help them get as close as possible to delivering to their fans what they love the most about their lyrics.

And ultimately, help them to get to the top. Follow the proven path. Stay unique.

If you want to write an album that will satisfy your fans' expectations, then compare your most successful album to the average quota of each storytelling criterion.

You especially need to check if the album follows the course of the average quota - like Sleeping with Ghosts does.

And every time the album is as close to the average as possible, consider this an indication for what your fans value to listen to in your songs. You can go back to your infographics and check if there might be a correlation between the albums and the chosen factors of success (Step 4).

If you look at the comparison between Sleeping With Ghosts and Loud Like Love above, you also see that Loud Like Love strays from the average of the criteria that we consider the most important.

So by knowing the average quota of your discography (= your fans' expectations) as well as the criteria that influence your sales the most (correlation to the chosen factor of success), you've found your Uniqueness Factor.

If we take note of how many times an album 1. fulfilled and 2. did not stray more than 10% of the average, then we can create another chart: 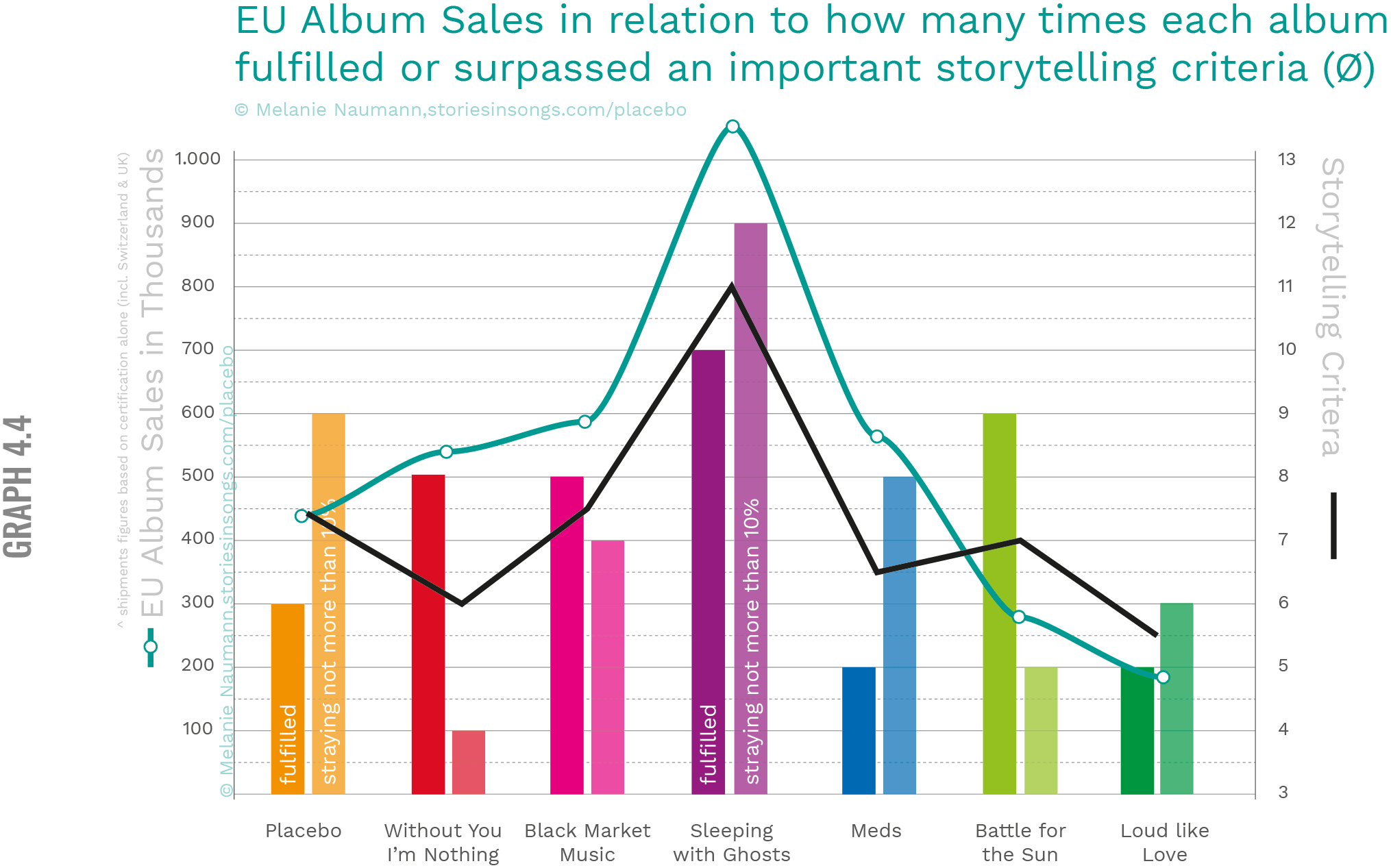 And now you can see exactly why every album sold as much as it did.

Lyrics play an important part in the success of a song or an album!

And when you've completed all five steps, you will know what makes your songs and albums so unique.

You will know your musical fingerprint.

And you will know what to look out for when you write the songs and lyrics for your next album.

4. Get your Uniqueness Factor so that your fans will love your next album. 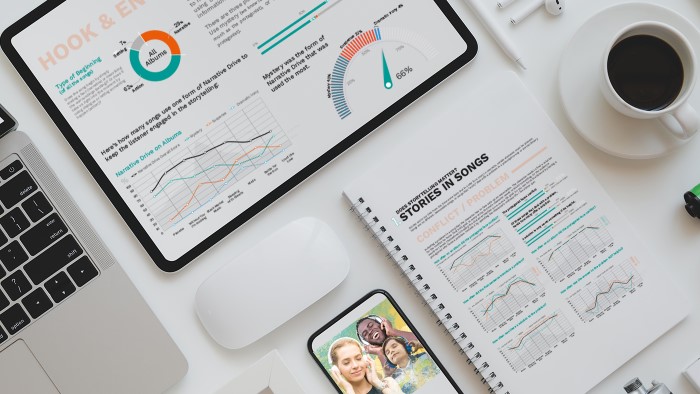 If you're interested to get this study done for your discography, I'm happy to do it for you.

I love storytelling. I am a certified story coach and consultant, and I love songs. Everything you've seen and read here is the combination of my passions put together: storytelling and songs.

And this is the system for analyzing songs that I have developed.

I am glad that you are here and that you allowed me to share my unique approach to analyzing lyrics with you.

And if you'd love to discover your Uniqueness Factor, I can't wait to start this project with you.

If you want to know about all the other cool things this service includes, you find more information here:

The Full Analysis of your Discography

Here's what you get:

And most importantly, you will know your band's Uniqueness Factor - and how to apply it in your songwriting so that you get more fans, reach higher album sales, and write engaging songs that truly make an impact on your listeners' lives.

→ Next Article: Westlife - One band. One genre. One success story. or write a Comment