Find out what your fans love the most about your lyrics.

Find out what your fans love the most about your lyrics.

Step 4 is all about: Comparing each album with the average result of every storytelling criteria.

So that you know which album is the closest to what your fans are expecting to listen to on your albums.

1. Prepare for this step by analyzing songs, doing the math, and creating infographics

In Step 3 we chose the relevant factors of success.

Reminder: An indicator for what your factors of success are, for example, are the countries in which you’ve sold the most albums, or reached continually a chart position among the top 100.

After you’ve completed all those steps, you have 13 different charts.

What is the storytelling strength of an album?

The storytelling strength of an album is the total of all the storytelling criteria summed up. The higher this number is, the stronger the song. Because the stronger, the more the lyrics fulfill what we are looking for to listen to an engaging song.

2. How can you make sure your factor of success is relevant?

Before I put the chosen factors of success into all my infographics, I first check if those factors show a correlation with the overall storytelling strength of each album.

That's why I sum up all the 13 most relevant criteria for telling a captivating story and I calculate the average storytelling strength of an album.

That means you take the result of each storytelling criterion (probably already in %), sum it up with all the other criteria %, and then you divide the total by the number 13 (that's how many criteria we've chosen to look at).

This will give you the overall storytelling strength in % for that album.

Next, you create another chart with the overall result for each album.

In the case of Placebo we'll get the following charts:

Our two factors of success are the European album sales as well as the UK chart position.

Graph 5.3 EU Album Sales and overall storytelling strength for the album-only tracks and the single releases

This graph shows the storytelling strength of the album-only tracks as well as the single releases.

The entire album is the dot in between those two song categories in correspondence with each album's color.

In this graph, you can see that there is a correlation between the storytelling strength and the chosen factor of success (EU Album Sales). Both lines (green and black) follow the same course.

The single releases of Battle for the Sun weren't that strong even though the album-only tracks were a lot stronger than on Meds. But once again, single releases play an important part in the success of an album because they set the expectations. If the singles won't convince the album, they will not give the album a chance. No matter how great the lyrics of the rest of the songs are.

Sleeping With Ghosts is Placebo's most sold album. And we see why that is: Because it's also the one in which the promise of the single release was kept with the album-only tracks. They are almost at the same level of their storytelling strength.

And the storytelling strength of that album (Sleeping With Ghosts) was the best of the entire discography of their studio albums.

Loud Like Love was the weakest considering the storytelling in the lyrics. And we can see that the number of European sales was also the lowest.

Charts 5.2 and 5.4 considering the chart position in UK album charts

I love those two charts because they show how important it is that the lyrics of your single releases are captivating and engaging.

They need to be strong considering the storytelling criteria or those songs will not have the power to boost your album sales.

Because of the correlation between the European Album Sales and the UK album charts with the storytelling strength, I've chosen those two factors of success for finding out which storytelling criteria are the most influential for the success of an album.

3. Find out what your fans love the most about your lyrics.

Now that we've got the infographics prepared and we know that our factors of success are relevant for the success of the band's album, we can find out what storytelling criteria your fans love the most about your songs.

In order to do that, you need to check the course of the line of your album with the line of the factor of success.

If they take a similar course, you can almost be sure that this storytelling criterion is something your fans pay attention to because they appreciate if your songs have that criterion fulfilled to a certain level (average quota of the entire discography).

Note: Look out for a line that mirrors the other. That means, when one goes up, it goes down, and vice versa.

That is also an indication that the opposite of what we looked at is relevant.

To find out which storytelling criteria have the most influence on an album's success in a band's album history, we not only look for a parallel course between the lines.

We also need to check if their most successful album is compliant with what their fans are expecting for that storytelling criterion.

That means is the album close to the average quota of that storytelling criterion = is it fulfilling or even exceeding it?

Note: You might not always see a clear correlation between the graphs, but once you've completed step 5, the following criteria will be a lot better to understand.


After all, we need to take the entire study of the discography into account and not just one single chart.

Now just look how much singles as well as the tracks on an album influence the chart position of the entire album. There’s a correlation, even though it’s a little tricky to see, because the average line of the albums doesn’t follow the ups and downs the sales chart, but instead it stays in that area.

And once again, Loud Like Love had the least songs that told stories. And you can see the effect on the chart position as well as on the European album sales. It only fulfills that criterion in 30% of the entire album tracks.

And most importantly: the average quota of how many times Placebo told part of a story in a song (unexpected event happened) is 63%.

And Sleeping with Ghosts, their most successful album, has fulfilled the expectation of the fans. The songs on the entire album (black line) fulfill that criterion to 64% which is totally in line with the overall average. Meds and Black Market Music, the other two albums that sold well, are in that area as well. 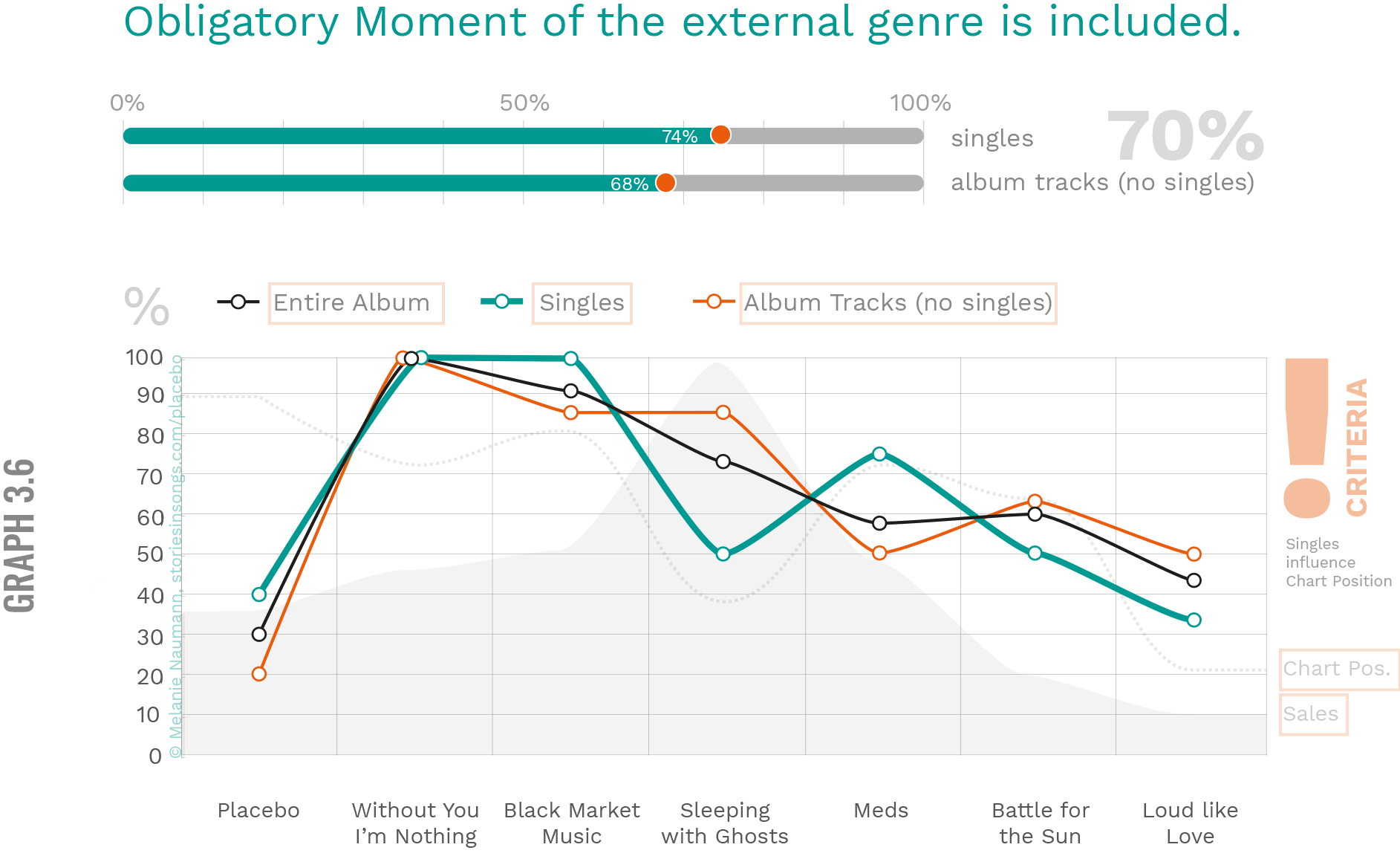 In this graph, you can see that each song category (singles, album-only tracks, entire album) is more or less in line with the factors of success.

The single releases, as well as the entire album, follow more the line of the chart position while the album-only tracks are closer to the number of sales.

Even though there is no indication of why Sleeping with Ghosts sold the most albums (Europe) is still closest to the average. 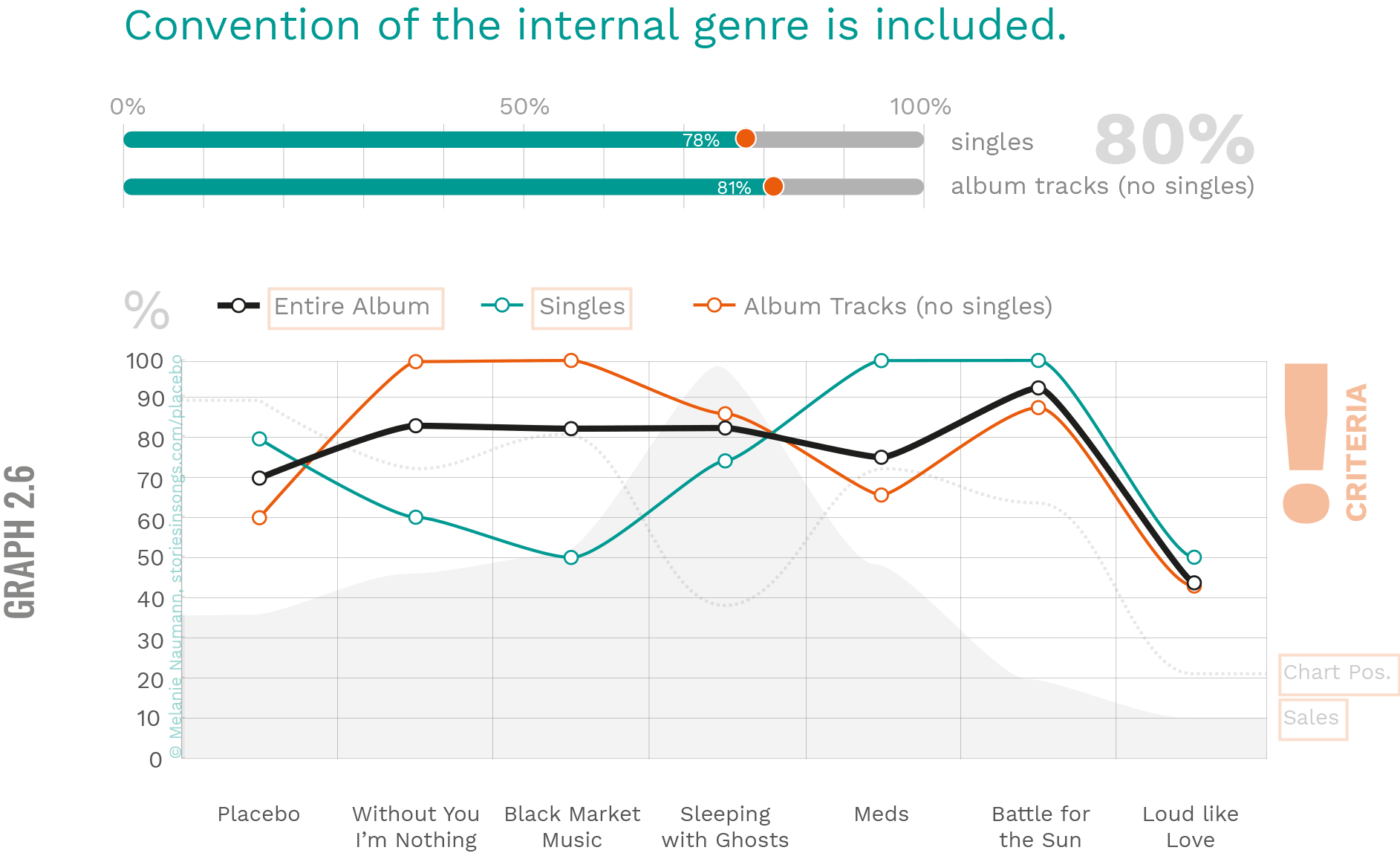 The entire album should stay around the 80% mark in order to fulfill this expectation.

That's why even though the line of the entire album doesn't follow the flow of the success factors, it still makes an impact on the factors of success.

In this case, it is important that the songs on an album stay around the 80% mark and do not stray away too much or this will influence the sales.

Rule of thumb: The closer the dots for each song category are together, the less they pull apart from each other, and the more they stay around the average, the more successful an album will be. (see Sleeping With Ghosts)

Loud Like Love did not fulfill this criterion not enough.

I don't see a correlation in the charts

Some studies of a band's discography are obvious to what the criteria for success are.

In other cases, like Placebo, it's not that apparent.

After all, there's more to the Uniqueness Factor than one chart.

There's a lot more you have to take into account in order to find out what is the most important storytelling criteria for a band or a musician.

That's why there's one important step missing that will give you the best indication as to WHY Sleeping with Ghosts was Placebo's most successful album, and why Loud Like Love wasn't as good.

And once you have completed Step 5 of this process, then you can look back on the mentioned criteria and understand a lot better in which interaction those criteria work together.

So stick with me.

The last step will solve lots of questions.

→ Next Article: Discover your Uniqueness Factor or write a Comment 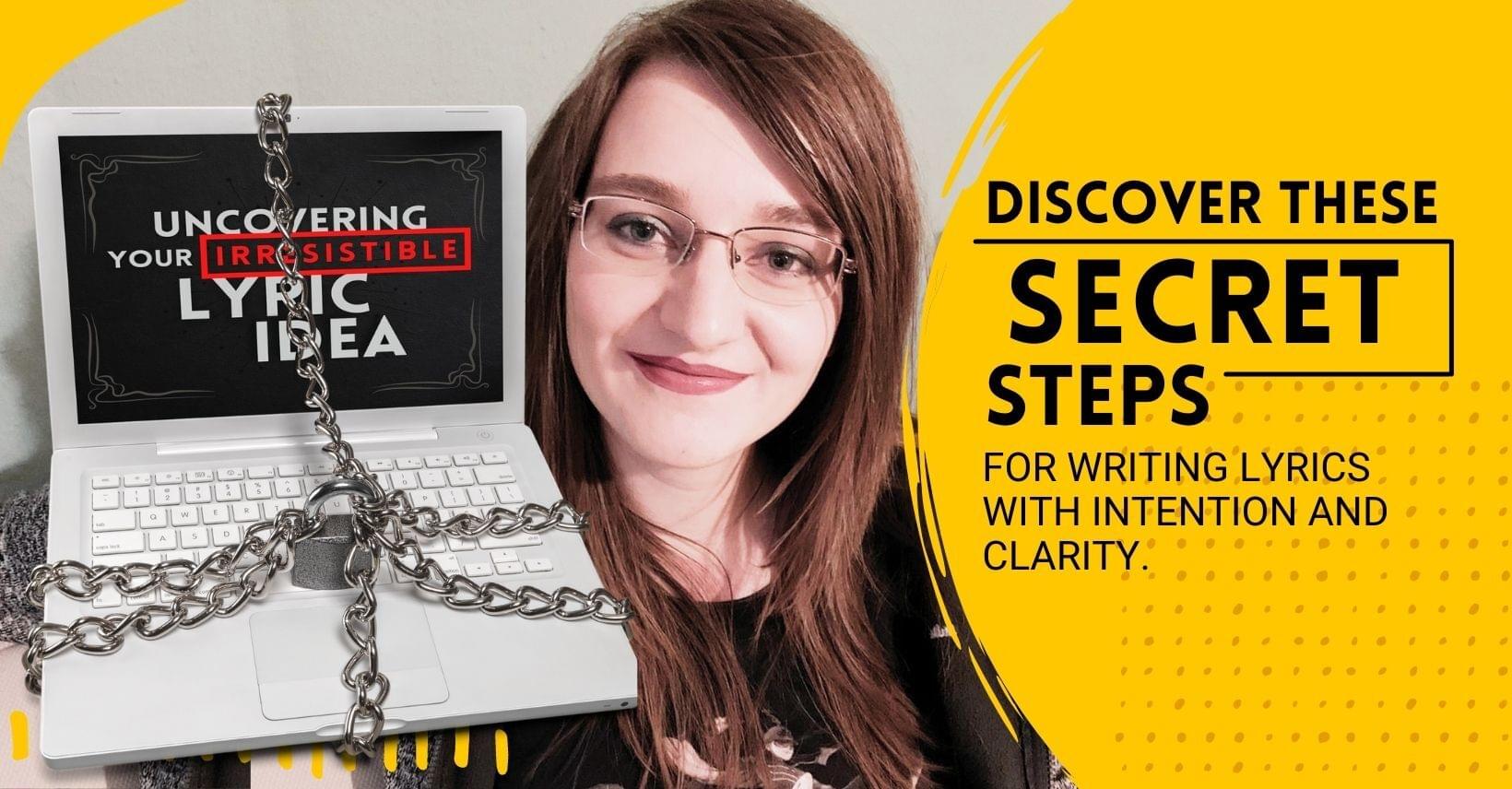