How do you create the infographics?

Compare your albums by creating infographics.

Step 3: How do you create the infographics for comparing your albums to their success?

Compare your albums by creating infographics.

How do you create the infographics?

After gathering so much information about each song by answering a dozen criteria and filling out a spreadsheet to collect the answers, you could leave it at that.

After all, now you have a detailed overview of each song and you can see by the empty columns, what storytelling criteria you do not yet have fulfilled. So that you know how you can tweak your lyrics by adding that information to your song.

But in order to compare the albums or single releases to the factors of success like chart position and album sales, it’s best to visualize the results.

WHY do you need to create infographics?

Seeing the results of this huge analysis visually will help you see how strong each album of your discography is. You can compare them.

And you will find patterns.

And by listing each album’s result in a graph together with the factors of success will give you a better understanding of which criteria influenced your sales.

Knowing the storytelling criteria that influence the factors of success is one of the two things we need to discover your Uniqueness Factor.

1. So how do you create infographics for the comparison of the albums?

The infographics are a simple chart.

Of course, you can design them any way you want and make them real fancy, just make sure that you focus on the data. 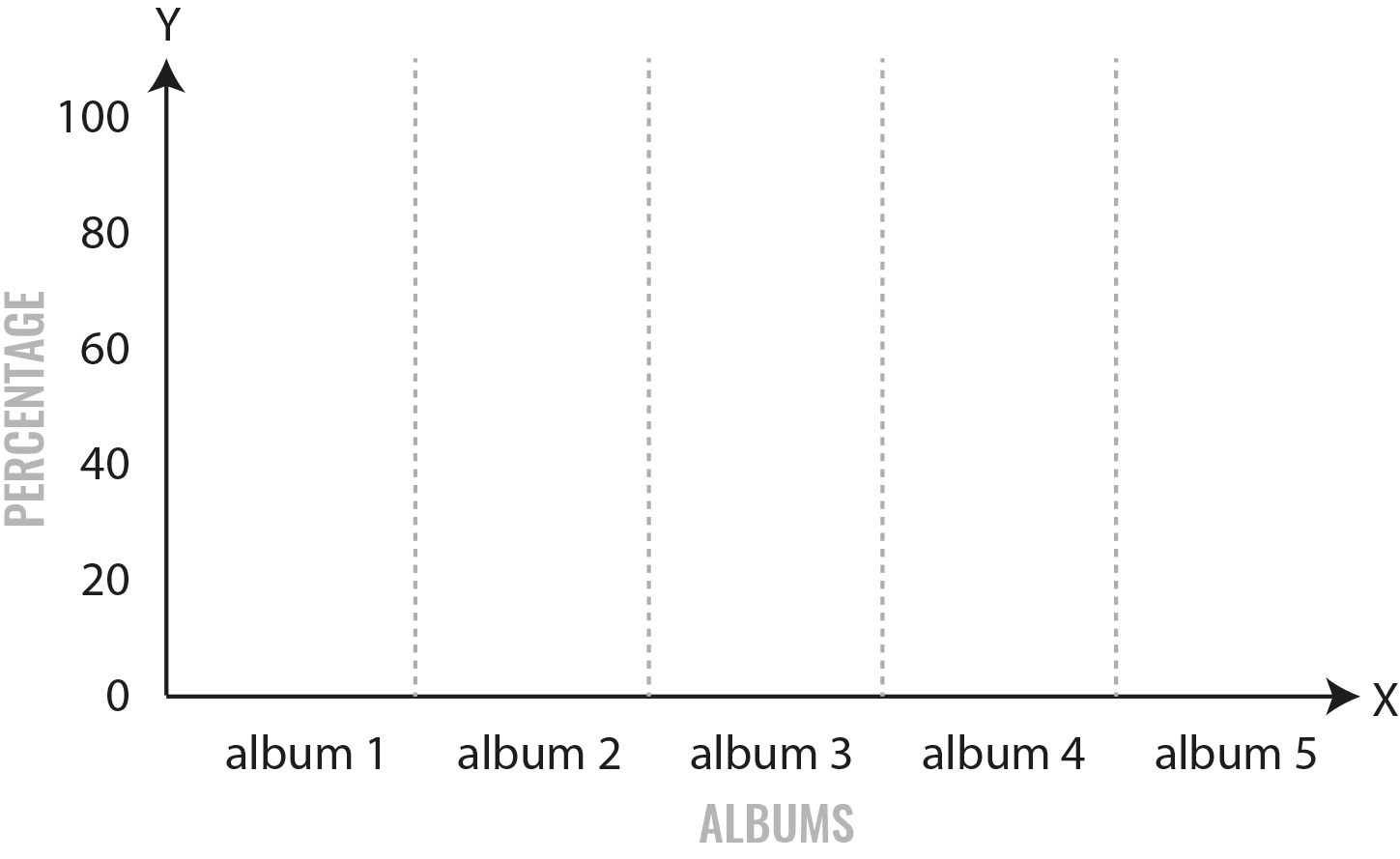 Since every album consists of songs that were chosen as single releases as well as tracks that are only released on the album, I add a table legend above the chart and assign the entire album, the single releases, and the album-only tracks a different color.

Especially when you want to track how single releases might have influenced the factors of success, it’s best to visualize the singles too.

After all, we are looking for patterns.

3. Get the numbers right

Now that you have the percentage listed on your y-axis, your albums on the x-axis, and you know what you are tracking, you can take your spreadsheet now.

Note: If you haven’t done so already, you need to calculate how many songs fulfill a certain storytelling criteria.

And you need to do this for the entire album, the single releases as well as the album only tracks.

Calculate the average of those three song categories for each album, and change the number into a percentage.

For example, if you have the storytelling criteria of How often does the character in the song have to deal with a problem, then in Placebo’s case we have the following numbers:

4. Fill in the results in the chart

Now that you have calculated all the results for your albums, you can fill in the percentage of each album, album-only tracks, and the single release for each album on the x-axis. 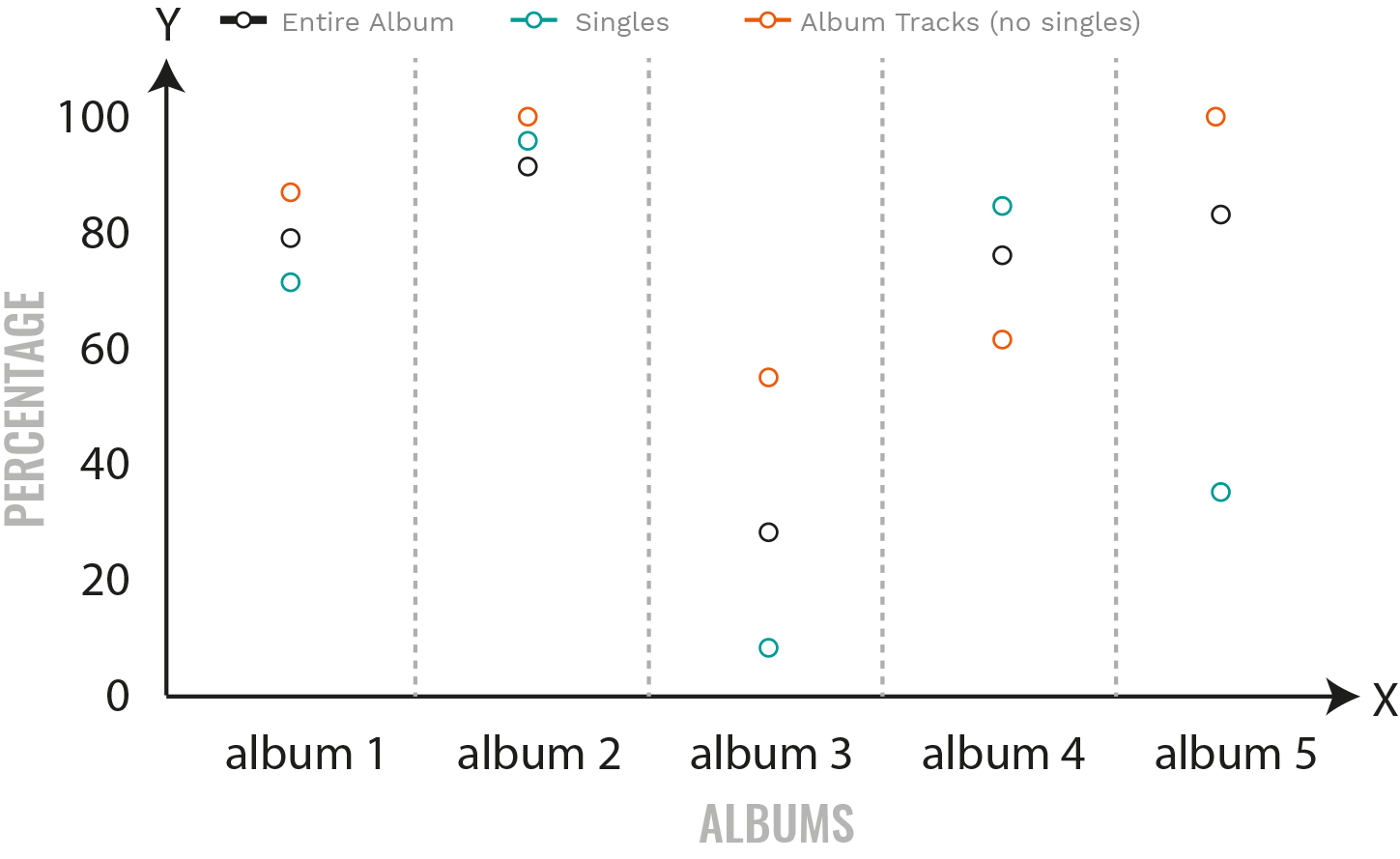 After you’ve done that, connect the dots of each song category with each other. 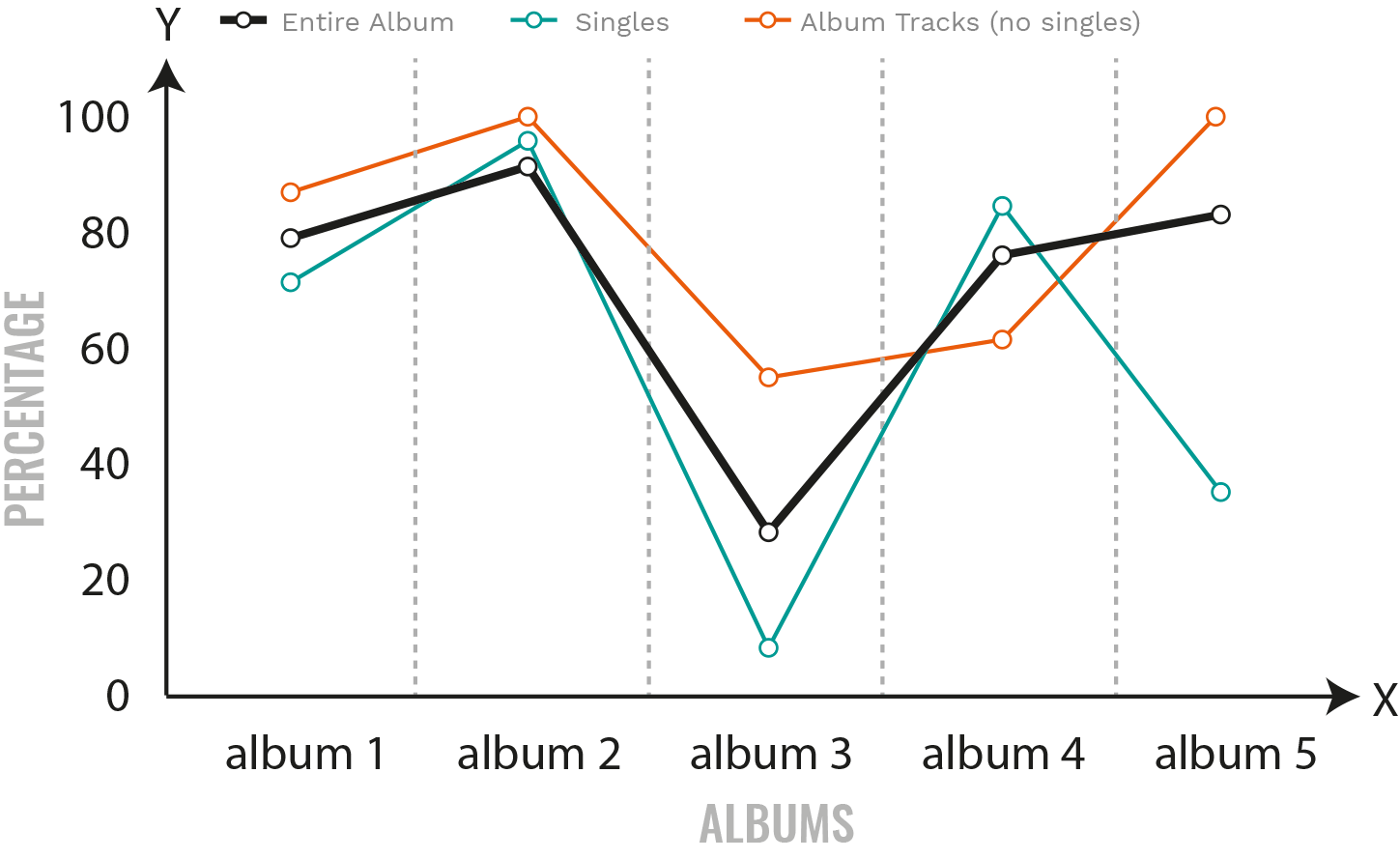 And voila, you got your first graph finished.

2. How do you insert the graph for the factors of success?

In order to insert your factors of success into your chart, you need to create another y-axis.

1. Choose the factor of success

Choose the factor of success that you think is the most relevant for your success.

For example, don’t choose the number of sales of your album in Belgium - at least if you’re not from there. That’s too small a factor to consider.

Take your worldwide album sales into account, or the sales in the US.

The same goes for the chart position. Choose a single country in which you’ve already placed your albums or your singles. If you don’t have any sales record in that country or were not in the charts - then that’s not a success indicator.

An indicator of what your factors of success are - are the countries in which you’ve sold the most albums, or reached continually the highest chart position.

If you know what your factor of success is that you want to compare to your albums, then collect the data for each album.

2. Extend your chart with the chosen factor of success 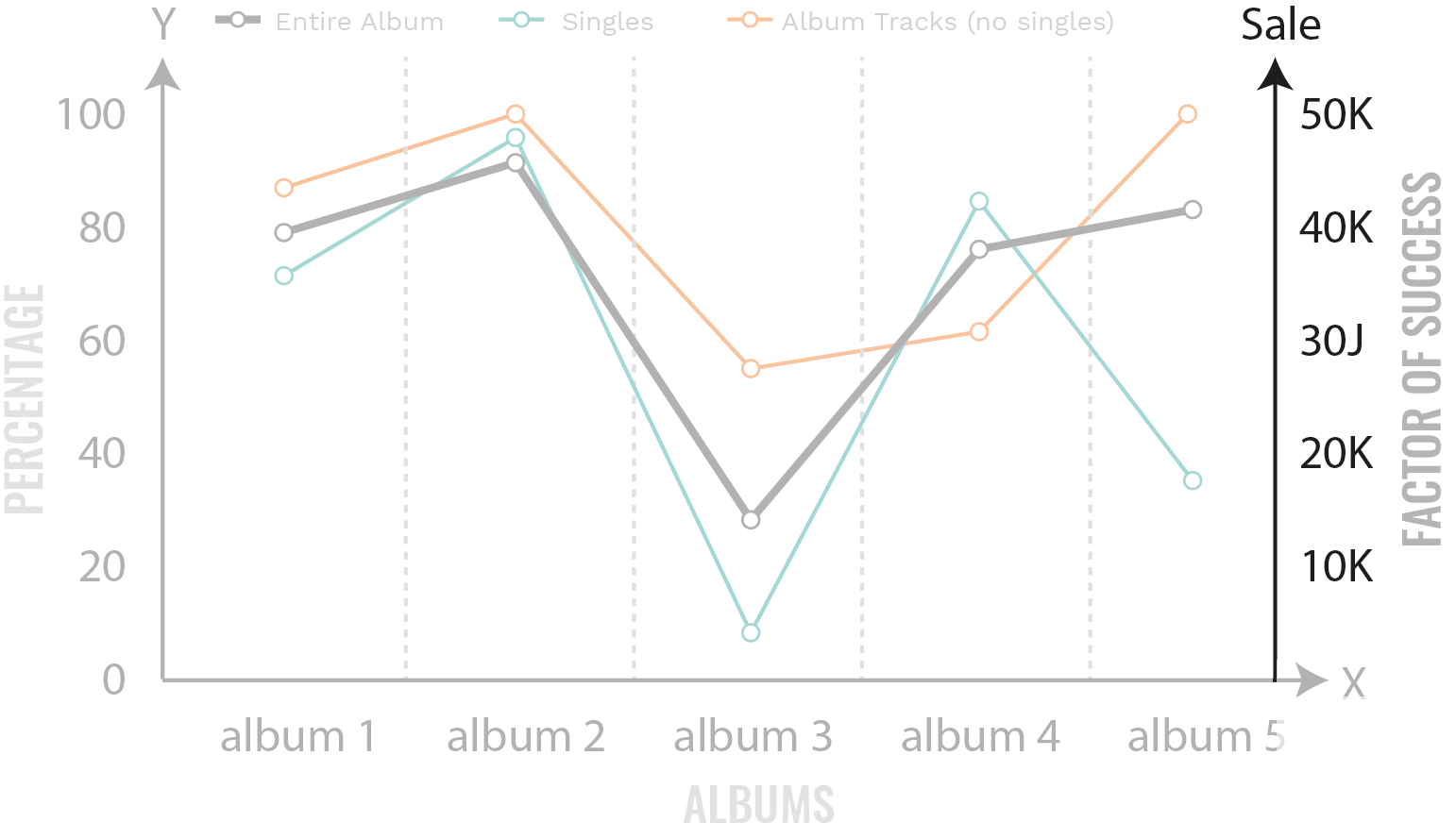 3. Fill in the data of the success factor for each album

Fill in the number of sales for each album into the chart. 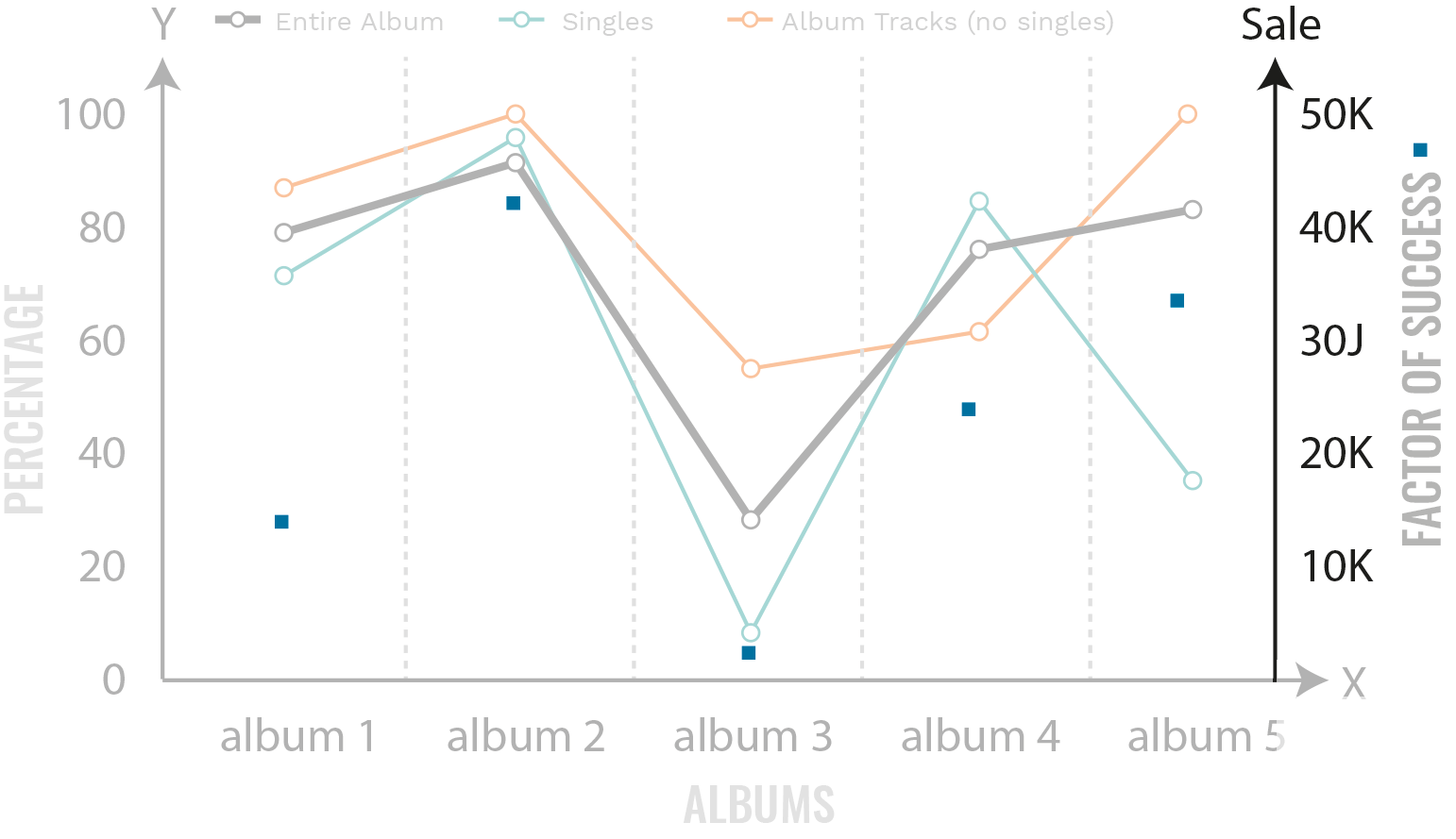 And connect the dots again. 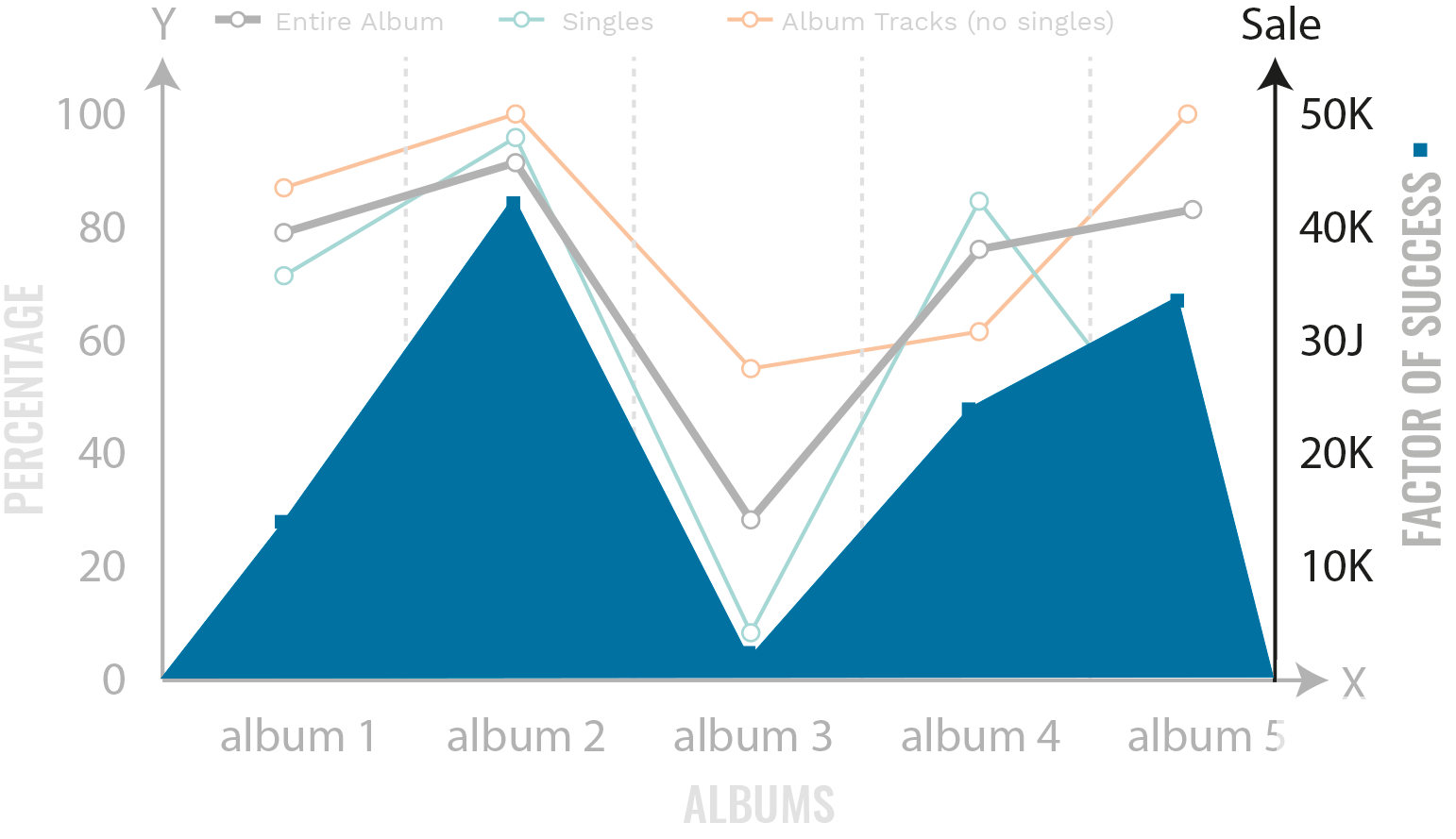 If you compare the course of the graph of your album results with the factor of success, you either find a correlation between the two (left image) that tells you this storytelling criterion is crucial for your success because your fans pay attention to it, OR the criteria is not influencing your success (right image).

I hope you have a better understanding now how you can create the infographics, and how you insert the relevant data for your albums and choose your factors of success.

Creating those infographics will give you a better understanding of which criteria influenced your success the most.

In the next blog post, I show you how you can find the storytelling criteria that influenced your album’s success the most.

→ Next Article: What storytelling criteria influences your album success? or write a Comment